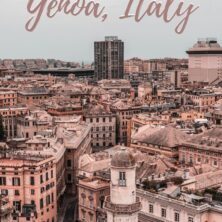 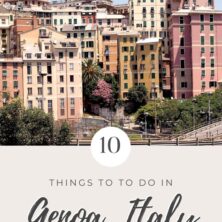 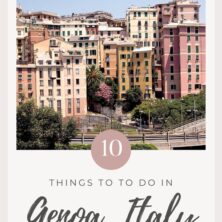 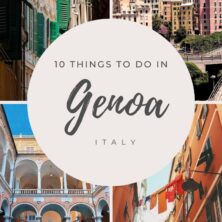 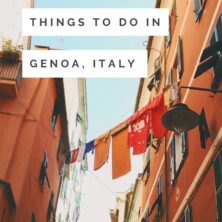 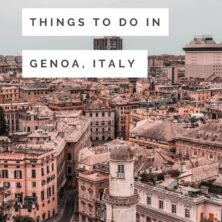 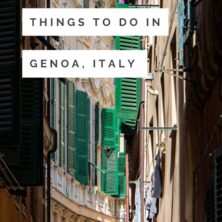 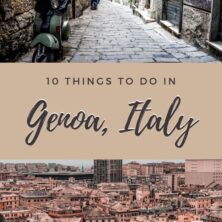 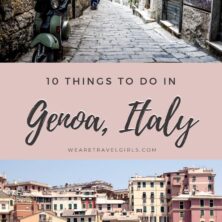 Although Genoa does not rise to the top of most Italy travel itineraries, the underrated birthplace of Christopher Columbus and pesto Genovese offers visitors rich maritime history, refined gastronomical fare, bustling piazzas, and noteworthy medieval architecture.

Genoa Italy was dubbed “La Superba” or the proud one by medieval poets and served as the European Capital of Culture in 2004.

The wealth and prestige of the influential families who ruled the mercantile Republic during the height of its power can still be seen in the decadent palazzos they constructed.

Unlike its former maritime rivals Pisa and Venice, Genoa still has a working port that was renovated in 1992 to commemorate the 500-year anniversary of Columbus’ expedition.

It still serves as the economic heart of the city.

The Galata Museo del Mare features several immersive exhibitions that trace the history of Genoa’s rise as a maritime superpower in the Middle Ages when it battled with Venice for mastery of the trade links to the East as well as the city’s role as the launchpad for Italian migration to America in the 19th century.

History buffs will appreciate the museum’s collection of old maritime maps and illustrated globes. The submarine tour is a hit with children, while the rooftop observatory provides panoramic views of the colorful city.

Genoa’s city center is best explored on foot with comfortable shoes. It is one of the largest preserved medieval city centers in Europe and boasts a long list of UNESCO World Heritage Sites.

Stroll along Via Garibaldi Avenue to view timeless 16th-century residences with lavish gardens. The avenue is aptly nicknamed the “golden street” by art history lovers for its concentration of museums that house many Renaissance masterpieces.

The city’s labyrinth of narrow alleys (or Caruggi as locals call them) offer up lots of shopping opportunities.

Travelers partial to glitzy European palaces such as Versailles should head to the Palazzo Reale.

This regal palace, built by the Babli family in the 17th century and owned by the House of Savoy in the 19th century, still contains many of the original furnishings and art. By the end of its rule, the Savoy dynasty reached almost all of the Italian peninsula.

The opulence of the palace, with its own less-crowded version of the Hall of Mirrors, is a testament to the power the family wielded.

The pastel passageways and Baroque gilded rooms are filled with artwork by renowned masters such as Van Dyk and Tintoretto. The Palazzo Reale’s terrace overlooks manicured gardens with sea views.

Related: The Best of Northern Italy in 4 Days

4) VISIT THE LARGEST AQUARIUM IN THE MEDITERRANEAN

Genoa boasts the biggest aquarium in the Mediterranean with the largest exhibition of biodiversity in Europe – 600 animal and 200 vegetal species.

You will need to budget a couple of hours to make your way through the numerous exhibitions and go early in the day if you would like to catch one of the dolphin shows. Virtual reality experiences and colorful jellyfish and local coral exhibitions also mesmerize young visitors.

There is even an Ice Kingdom exhibition that includes penguins from the Antarctic region. I’m a bit partial to penguins, so I was excited.

A short walk from the palazzos is the Romanesque-gothic San Lorenzo Cathedral built between the 12th and 14th centuries. The cathedral’s main façade design alternates black and white stone, a pattern that is commonly seen throughout major cathedrals in the Liguria region.

The interior is decked out in Byzantine-style frescos, while the underground Treasury museum houses the valuables and religious objects such as the “Sacro Catino” believed by some to be the Holy Grail.

Located at the crossroads of the historic city center and modern financial district, the Piazza de Ferrari and its photogenic fountain make a good stop to rest and grab lunch after exploring the historic center or museums.

On a sunny day, the fountain is the perfect spot in the middle of the lively piazza to sit and people watch or admire the Art Nouveau architecture of the Palazzo Della Borsa, which houses the stock exchange.

Our Top Places To Stay In Genoa, Italy

During its glory days from the 15th to 17th centuries, Genoa provided inspiration to Flemish master painters who established a thriving art movement in the city and created masterpieces such as the Portrait of a Lady.

Wander between the aquarium and port area of the old city to stumble upon street art.

8) CATCH THE SUNSET AT THE OLD PORT

Modern attractions and bay view restaurants were added during the port renovations led by one of the legends of contemporary Italian architecture, Renzo Piano.

The gentrification of the Porto Antico has increased its popularity with locals and tourists alike. For a rotating bird’s eye view of the port, take the crane-inspired Bigo elevator up 150 feet. (During winter months, the elevator is open only on weekends).

The perfect time to grab a drink and snacks for an Italian Aperitivo at the Porto Antico is during sunset when the picturesque hillside homes are bathed in golden light.

Related: 20 Things To Do In Positano

A trip to Genoa would not be complete without sampling some local pesto Genovese, focaccia bread, and fresh seafood. The Liguria region is the birthplace of this hallmark sauce and locals are proud to produce homemade variations with different cheeses.

Pesto is traditionally served with trenette or Trofie pasta (made with twisted dough). Although Italians are very particular about the specific type of pasta that should accompany each sauce, Zeffirino offers up some unique pesto-based dishes. To sample the best focaccia in town, head to Focacceria San Lorenzo.

If you like seafood, try the local twist of adding pesto to the traditional pasta in white clam sauce.

10) CHECK OUT THE GLITTERING ITALIAN RIVIERA

As the capital of Liguria, Genoa makes an ideal base for exploring the glittering towns of the Italian Riviera. The popular Cinque Terre fishing villages and the small towns in the Gulf of Poets are a quick and inexpensive train ride away.

For less than €10, you can head to the world-famous resort town of Portofino to mingle with jet-setters and window-shop at the high-end boutiques.

The 16th-century fortress museum at Castello Brown provides panoramic views of the town’s pastel-colored buildings and the Ligurian Sea.

For a more local vibe, head to Sestri Levante. Despite its two fabled bays made famous by poet Hans Christian Anderson, Sestri Levante has managed to escape the mass tourism of other neighboring hubs like Cinque Terre.

Note: Many museums and restaurants in Genoa are closed on Mondays!

WHAT TO KNOW FOR VISITING ITALY

Italy is part of the European Schengen zone, which typically provides 90 days of free entry every 180 days to visitors from many countries. This means you can enter Italy and travel between other European countries for up to 90 days per stay.

Be sure to check the EU Schengen website for the latest information for your specific country.

The currency used in Italy is the Euro (EUR). The current exchange rate is approximately 1 EUR to 1.10 USD. You can check the latest EUR exchange rate on Google.

While traveling, our number one tip is to use a free Charles Schwab Debit Card which gives unlimited worldwide ATM Fee Refunds and the true exchange rate.

Some of the best tours and things to do in Genoa are:

WHERE TO STAY IN GENOA

We recommend booking your hotels on Booking.com to get the best rate and many hotels offer free cancellation in case your plans change.

Some of our favorite hotels in Genoa are:

AirBnB is also a great option in Genoa (and you can save $44 using that link to sign up!).

The best time to visit Italy is during the dry season between April and October. July and August can be very crowded, so we prefer the shoulder months of April, May, September, and October.

WHAT POWER ADAPTERS DO YOU NEED

You can buy a universal adapter that will work in any country and has extra ports for USB cables to charge your phone and other devices.

We also always travel with a portable battery pack which is great to keep your phone charged on long journies.

Our top recommended travel insurance companies for Italy are:

Genoa Italy is not as famous as an Italian destination as Positano, Cinque Terre, or Florence, but it is well worth a stop on your next Italian getaway!

I hope that you found this article helpful to plan your trip visiting Genoa and Italy. Please share your own Genoa stories in the comments below and let me know if you have any questions!

ULTIMATE 7-DAY ROAD TRIP ITINERARY FOR MADEIRA, PORTUGAL
SOLO HIKING IN ZAKOPANE AS A FEMALE
10 BEST THINGS TO DO IN PICO, AZORES ISLANDS