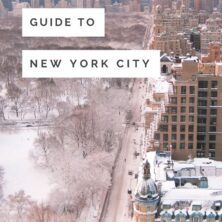 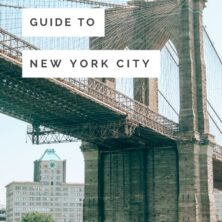 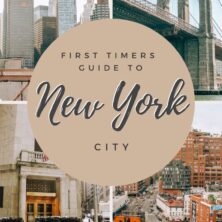 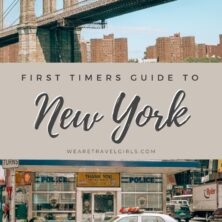 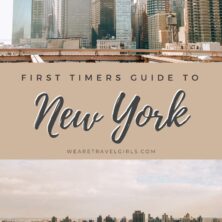 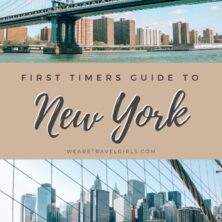 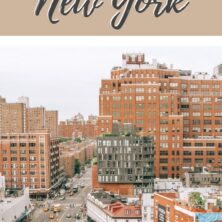 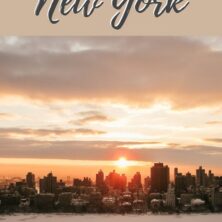 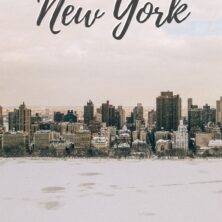 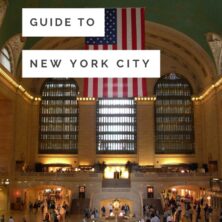 I had been dreaming about visiting New York for a long time and my dream finally came true in March this year. Despite thinking that we know NYC from all the films and TV series we have seen, it is even more impressive than you could have imagined.

I was overwhelmed by all the tall skyscrapers, the hustle and bustle of the city and the never-ending police sirens and taxis horns. New York is a fast-paced cosmopolitan city full of life, also known as The City That Never Sleeps.

In this guide, I share a few things you need to know for your first visit to New York.

Like any capital city, New York can be visited all year round as there will always be something interesting going on whatever the weather. In my view, spring is the ideal time to go as days are longer, the parks are in full bloom and it’s warmer without being too hot. I was lucky enough to have sunshine and a clear blue sky every day I was there without a single cloud.

Where To Stay In New York

It is hard to choose where to stay amongst all the different neighbourhoods but I personally recommend staying in SoHo as it is within walking distance of all the emblematic monuments and is full of charm with its beautiful cast-iron architecture.

It’s a very trendy neighbourhood full of interesting galleries, fantastic restaurants, and lovely boutiques. I stayed at the Sixty SoHo Hotel and would recommend it to anyone going to NYC. Their rooms on the top floor offer amazing panoramic views and the best thing was breakfast every morning.

Related Post: Where To Stay In New York: A Guide To All The Neighbourhoods & Hotels

Where To Eat In New York

I had some great meals in New York but my favourite two were lunch at The Meatball Shop in Williamsburg and dinner at The Little Owl in West Village. The city has many amazing rooftops and the one I liked the most was The James New York in SoHo as it has one of the best sunset views.

For a cool speakeasy and delicious cocktails try The Garret in West Village which is just above a Five Guys. I also loved the bar at the NoMo SoHo Hotel because you feel as though you’re in a botanical garden and the music is really good.

Things To Do In New York

Due to its immensity, I would say that the best way to plan your trip to NYC is by dividing it into the following areas: Upper East & West Side, Midtown, SoHo – West Village – Chelsea, Lower Manhattan, and Brooklyn.

If it’s your first time in New York you will, of course, want to see the most iconic monuments such as the Statue of Liberty, Times Square, Brooklyn Bridge, the Charging Bull, and the Empire State Building, amongst others, but don’t forget that there is so much more to see and do in the Big Apple.

The Frick Collection for its beautiful serene indoor garden and wonderful masterpieces of renowned European artists. It is less chaotic than the big museums and is the ideal place to go to after a long day walking around Central Park and the Upper East Side.

The High Line for a lovely walk along a disused railway which has now been converted into a park. There is a big contrast between the beautiful plants and flowers on the High Line and the huge skyscrapers surrounding it.

You can finish your walk with lunch at the Meatpacking District, a unique historical neighbourhood full of interesting shops and restaurants.

Top Of The Rock

Top of the Rock at the Rockefeller Center for its spectacular 360° views over New York. I particularly recommend going at sunset as the colours and reflections of the sun on the buildings are amazing. It’s where you will get the best view of the Empire State Building.

9/11 Memorial for being the most breathtaking and beautifully conceptualized memorial I have ever seen. A security guard explained to me the meaning of the design which was that the water represented the tears shed by the victims’ families and that the smaller square hole in the center represented the hole left in their hearts. I found that very touching and emotional.

New York Water Taxi for a relaxing tour along the Hudson River. This is an ideal way of getting a good perspective of the city on your first day whilst passing by iconic monuments such as Brooklyn Bridge, Red Hook, the Financial District, the Statue of Liberty and Ellis Island.

I don’t know when I’ll be returning to New York but I do hope to visit this amazing city again soon. I hope you enjoyed my post and that it will encourage you to visit the city for the first time or to return if you have already been in order to visit the places you may have missed out on.