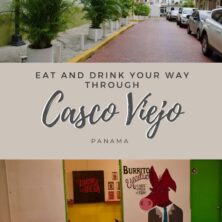 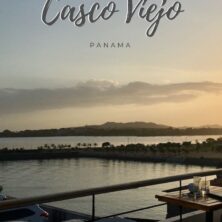 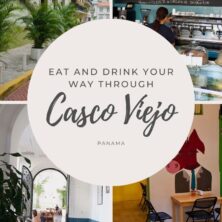 A few months ago, I found myself finishing up a work contract on the National Geographic Quest in Panama and instead of flying straight home or straight to my next travel destination, I decided to stay in Panama City and explore the food scene in Casco Viejo for a few days. I’d flown in and out of Panama City plenty of times before for countless contracts on the ship, but I’d never actually spent much time in the city.

Despite being a popular place for ex-pats and retirees, Panama City itself doesn’t have a whole lot to offer in terms of tourist attractions. It’s the things outside the city like seeing the Canal, exploring the Pearl Islands, or visiting the indigenous people of the Darien that draw people to this area. However, that was until the old town of Casco Viejo underwent a major renovation several years ago.

In this guide, I share the best bars, restaurants, and places to stay in Casco Viejo, Panama!

For the next 340 years or so, the old city lay in half ruin while a newly built and much better protected Panama City thrived a few kilometers to the southeast.

In recent years, however, Casco Viejo has undergone major renovations and many of the colonial buildings have been rebuilt and revitalized. In 1997, Casco Viejo received the distinction of become a UNESCO World Heritage Site. Today, tourists flock to the cobblestone streets to dine in Casco’s fancy restaurants and sip cocktails on rooftop bars as the sun sets over the Pacific Ocean. It’s an up and coming posh place for sure.

Seeing as I had just finished a month-long work contract on the ship, I was in desperate need of some decompression time and spending a few days eating and drinking my way through the streets of the classy old city sounded pretty good to me.

Panama City is definitely gaining a reputation for craft cocktails, particularly rum-based ones because that’s what Panama does best (although you’ll be hard-pressed to find Captain Morgan’s anywhere). In fact, there’s even a rum bar in Casco Viejo that showcases their own locally distilled artisanal rum.

The first craft rum distillery in Panama, Pedro Mandinga’s is a must stop for a traditional cocktail. Head to their rum bar to try their refreshing rum mojito and other creative rum-based cocktails. while listening to salsa music or playing dominoes with some new friends.

If you’re looking for an even more upscale place to enjoy a cocktail, Alquima is the place to go. Located above the elegant Laboratorio Madrigal restaurant, the bar is dark and moody (in a good way) and the cocktails are exquisite. I had the Penicilina, a perfect blend of single malt whiskey, lemon, ginger syrup, and honey. Devine.

Another place I had to visit in Casco Viejo was The Strangers Club with its classy interior and thoughtfully crafted libations. It did not disappoint. Founded by six bartenders from New York City, The Strangers Club serves up some of the best cocktails I had in the old city and the friendly staff were a pleasure to chat with.

Casco Viejo also has several roof-top bars and my favorite was CasaCasco. The building actually hosts five different fancy restaurants, one on each floor. I didn’t try the others (there’s a disco club, a boutique restaurant, a sushi bar, and a gastropub) but the rooftop terrazzo is a fantastic place to sip on a gin and tonic and watch the sun go down over the pacific.

I feel like I did a pretty good job taste-testing cocktails around Casco Viejo (for research, you know?) but there were a few places still left on my list as I departed Panama City. I would have loved to have had a drink at the ritzy American Trade Hotel, tasted the interesting concoctions at 1688 Bar, and experienced the underground vibes at Relic.

Now onto the food! Casco Viejo has no shortage of good places to eat and while I tried my best to tick each one off my list over three short days (seriously, I did) I fell way short of that goal. But here are the restaurants I did try and ultimately loved.

A friend on the ship recommended this Peruvian place to me called Nazca and it was the first place I ate in Casco Viejo. It set the bar high. The food was fresh and delicious and the staff was super friendly. I would have eaten here again if I hadn’t had so many other places on my list.

Looking for a Sunday brunch place to sate my growing hunger after an evening of cocktails, I stumbled upon Mahalo and its cute, garden-like cafe setting and healthy menu.

I almost got up and left, though, when they said coffee wasn’t available that day. Brunch without coffee is not ok, especially with a mild hangover. But I’m glad I stayed because the avocado toast with feta and basil was amazing.

I found Papaya Planet Bookstore & Cafe while wandering around the old city and when I stepped inside I was instantly in love. The left wall is lined with a tall bookshelf that holds a carefully curated selection of acclaimed English and Spanish books and there’s a giant stuffed camel just because.

The restaurant to the right is bright, open-aired and very chic. The menu was right up my alley as well with dishes like baked feta with honey and rosemary, green shakshuka, and kale Caesar salad. So good.

Looking for a quick, easy lunch spot I headed over to Tacos La Neta and indulged in some of the best tacos I’ve ever had. Seriously. Delicious carne asada, carnitas, and fried fish were piled onto freshly made corn tortillas and topped with fresh cilantro, avocado, queso, and more. The homemade sauces – ranging from no spice to super picante – were the icing on the cake. Or taco?

There were a number of restaurants in Casco Viejo that I didn’t get to try out because I either didn’t have the time or they were a bit out of my price range. Casco Viejo is not cheap.

My wish list for next time, though is as follows:

Where To Find The Best Coffee

No trip to Panama City (or any Latin American destination for that matter) would be complete without drinking a lot of coffee. And Casco Viejo has some great options.

I loved Unido Casco Viejo for its hipster vibes and beautiful interior, Super Gourmet for its truly amazing Americano, and Casa Sucre for its friendly service and breakfast tamales. Tiempo in the beautiful American Trade Hotel also serves incredible coffee as well as great breakfast sandwiches.

I love ice cream. And since I was already overindulging in food and drink during my brief stay in Casco Viejo, why not let ice cream join the fun, too?

There are several places to enjoy frozen treats in the old city, but my favorite was Grancelmente with its array of freshly made gelato in all sorts of delicious flavors. Two other good options are Benissimo Gelato & Caffe and the chain Palettamerica, which serves up beautiful and creative palettes (Latin American popsicles).

The American Trade Hotel is a luxury boutique hotel located within a beautiful old colonial building right in downtown Casco Viejo. It’s also close to all the above-mentioned restaurants and bars.

If you’re looking for a spacious two-bedroom suite head over to La Isabela Suites. The rooms are stunning!

And there you have it! An in-depth guide to eating and drinking your way through Casco Viejo. If you’re traveling through Panama City – may be before or after transiting the Canal – I highly recommend spending one or two days in the Old City. The recent renovations are stunning and Casco Viejo now feels like the old colonial city that it once was, now with top-notch restaurants and cocktail bars.

We hope that this article has helped inspire you to take a trip to Casco Viejo, Panama. If you have any questions about the destination or have your own travel tips to share please leave these in the comments below.

This website is a free resource we may use affiliate links in our articles. Please see our Disclosures for more information.

10 PLACES NOT TO MISS IN SOUTHWEST ENGLAND
11 BEST BARS IN LISBON FOR AFTER-WORK DRINKS
BEST THINGS TO DO IN HAIFA, ISRAEL