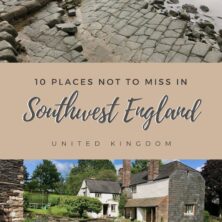 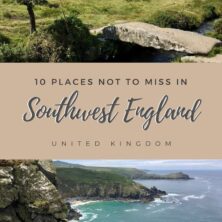 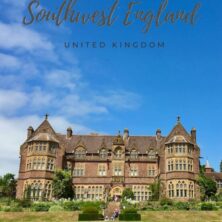 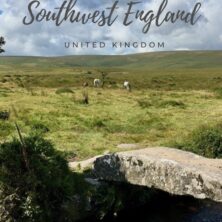 When most people think of England, they think of visiting London, Big Ben, and Buckingham Palace. While London is a special place, it would be a mistake to overlook all the things that are offered outside the city in Southwest England!

A few summers ago, I spent almost three months housesitting in and exploring the incredible gem that is Southwest England. My housesit was on a beautiful old farm just outside of Wellington in the rural farmland county of Somerset and I had acres of rolling hills studded with sheep and horses right outside my backyard.

And truthfully, Southwest England blew me away. I wasn’t expecting the stunning landscapes, the dramatic coastlines, the hidden rivers, and lakes, the wild ponies roaming free on the moors… Almost every place that I visited was jaw-droppingly beautiful. And since I had ample time to explore, I saw a lot.

If you are heading to Southwest England, these are the place you will not want to miss!

This is partly due to the fact that England is a bit more cramped on space than the US and also because these villages have been around for far longer than the parks have.

You can’t really move a village when designating park boundaries. But nonetheless, Exmoor National Park is definitely a place worth exploring.

There are countless trails and backroads that run through its rolling hills and the landscape is diverse enough that there is something new to see and discover each time you go. The South West Coast Path, which circumnavigates southwest England, runs along the north coast of Exmoor through picturesque towns like Lynton and along steep cliffs that drop straight down into the sea.

There are wild ponies, hidden pools for skinny-dipping, fields filled with wildflowers, ancient stone structures like the clapper bridge at Tarr Steps, and the best cream tea I’ve ever tasted at the Tarr Farm Inn (or you can book your stay at the inn to have more time there).

Even if you don’t like theatrical performances or plays, go. The location of the Minack Theater is magnificent and the experience is unrivaled.

The theatre is built into the rugged cliff walls at the southernmost tip of Cornwall and the backdrop to the performance stage is the dazzling blue ocean. It is simply magical.

Tickets are pretty affordable, too – around £12-15 per person and shows range from Shakespeare favorites like King Lear to more modern performances like The Wizard of Oz.

The Minack Theater was a definite highlight for me during my trip. Just make sure you give yourself plenty of time to get there. The narrow road to the theater gets extremely backed up with traffic.

Like Exmoor, there are wild ponies roaming freely but unlike Exmoor, Dartmoor has more of a dark, dramatic feel to it that I loved. It’s where the Netflix series Sherlock Holmes Hounds of Baskerville episode was filmed (if you haven’t watched the series yet, I highly recommend it).

Hike up to one of Dartmoor’s many rocky tors, seek out an ancient stone circle, visit the castles and ruins, or get lost in its dark forests. Dartmoor is a special place.

What a wild, Jurassic place this is. Located on the north coast of the Quantock Hills, Kilve Beach is a hidden gem that not many people know about.

You can find ancient fossils, walk among incredible rock formations that look like petrified dinosaur skin, stroll along the South West Coast Path, or simply enjoy a picnic on the pebble beach. There’s also a great little cafe – the Chantry Tea Gardens – that serves amazing food from the remnants of an old medieval church.

The Ethicurean, located just outside of Bristol, is an amazing farm-to-table restaurant that serves creative and delicious meals. I ate here twice during my summer in England and I would go back just to order the Welsh Rarebit.

All of the ingredients come either from their private walled garden located steps away from the restaurant or from local purveyors. And all the food was so delicious and so fresh.

It was truly one of the best meals I’ve ever had in my life, for sure. Reservations are highly recommended and be sure to get there early so you can stroll around the gardens and orchard.

Picture the cutest, quaintest, small English fishing town you can and you’ll probably envision something like Clovelly. Sure it’s touristy, but the fact that you can’t drive through the town due to its steep and narrow cobblestone streets deter some people from visiting and gives it a less crowded feel.

Clovelly also lacks the knickknack stores that turn me off from so many other touristy towns. Spend an hour strolling through the flower-filled lanes, have a coffee at one of the cafes, make your way down to the quay, and don’t miss the Fisherman’s Cottage where you can step back in time and see what it was like to live in an English fishing village 100 years ago.

Another MUST do if your travels fall on a market weekend. The Frome Market happens every first Sunday of the month from March to December in the historic downtown of Frome.

Crowds come from all over to shop the stalls, buy locally made crafts, eat delicious food, drink freshly made cider, listen to live music, drink some more, and all-around have a jolly good time. You can also sign up for courses to learn trades like knife-making or fermentation.

Be sure to arrive with an empty belly!

A trip to Southwest England wouldn’t be complete without at least a day trip to the ancient Roman city of Bath. I loved walking the cobblestone streets, exploring the underground Roman bathhouses and learning about the medieval Roman times at the self-guided museum.

If you’re in need of a spa day, there are plenty of soothing mineral baths to soak in as well. The Royal Crescent is also located in Bath, which is a sight to behold and the lawns out front are a perfect place for a picnic, or you can book a stay to really treat yourself!

Cornwall has some of the most beautiful, most dramatic coastlines I’ve seen in my travels to date. It’s rugged, it’s fringed with purple heather, the water is all sorts of shades of blue, and if you walk or drive far enough out of the way you can have it all to yourself.

I did a short hike at Zennor Head and the views were incredible. There are tons of other great little spots all along the Cornwall coast, so you really can’t go wrong.

There are plenty of castles, large estates, and manors in Southwest England, but Knightshayes Court was one of my favorites. It’s located just outside of the town of Tiverton and there’s enough to see and do to entertain for at least a few hours if not half a day.

Explore the walled kitchen garden, enjoy a picnic or nap on the lawns, walk the wooded trails, wander through the rooms of the old manor, stroll through the manicured gardens, have some fun in the playground made out of a fallen tree or treat yourself to locally made ice cream cone.

The best time to visit Southwest England is during the warm summer months of June through September. Many of the above places are open during winter, but you’ll most likely face cold rain showers and chilly temps.

So if you find yourself in Southwest England – either road-tripping through the moors or settled into a lovely old estate – during the summer be sure to seek out these top 10 highlights. You won’t be disappointed!

We hope that this article has helped inspire you to take a trip to Southwest England. If you have any questions about the destination or have your own travel tips to share please leave these in the comments below.

THE BEST THINGS TO DO IN DEVON, ENGLAND
THE 5 BEST WINTER GETAWAYS IN ENGLAND
THE HAGUE CITY GUIDE FOR EVERY TYPE OF TRAVELLER

END_OF_DOCUMENT_TOKEN_TO_BE_REPLACED

Exclusive Member of Mediavine Travel Development by Chalk and Canvas