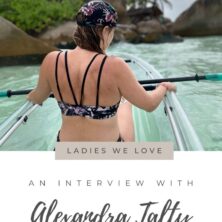 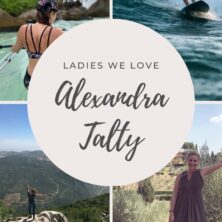 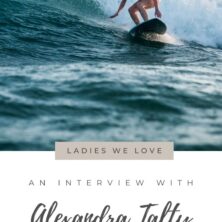 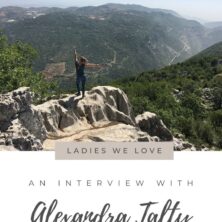 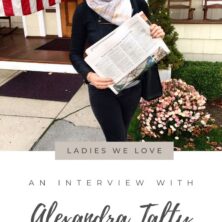 Ladies We Love is a monthly interview series with women from around the world that provide us with inspiration through their travels and personal stories. This month we got to know journalist Alexandra Talty.

Table of Contents hide
1) Alexandra, Please Introduce Yourself To Our Readers? What Do You Do? Where Are You From?
2) What Inspired You To Become A Travel Writer And Journalist?
3) You Are An Award-Winning Journalist And Senior Contributor For Forbes, Your Writing Has Appeared In Many Other Big Publications, How Did You Get Involved With Forbes And These Other Big Companies?
4) You Have Traveled And Lived In Many Countries, What Are Your Top Three Recommended Destinations To Visit?
5) You Have Been Living In Lebanon And The Middle East For Almost 10 Years. What Inspired The Move?
6) How Did You Find A Job In The Middle East?
7) And How Is Life There? What Is It Like Being A Woman In The Middle East?
8) What Is The Going Out Culture Like In Lebanon?
9) What Is The Dating Culture Like?
10) You Have Appeared On Television And The Radio In Addition To Writing, Which Is Your Favorite Form Of Journalism?
11) You Speak Three Languages, What Advice Would You Give To Readers Who Want To Learn Another Language?
12) What Advice Would You Give To Aspiring Journalists?
13) Now For A Fun Question, Tell Us A Fun Fact About Yourself?
14) Favorite Quote?
Read More Ladies We Love Interviews
Connect With Alexandra Talty
Pin For Later

1) Alexandra, Please Introduce Yourself To Our Readers? What Do You Do? Where Are You From?

I am a travel writer and journalist originally from Southampton, New York although I now live in a small surf town in Lebanon.

2) What Inspired You To Become A Travel Writer And Journalist?

I first moved to Lebanon in 2013 to become a journalist. At the time, I decided to cover tech as there were a lot of interesting startups and accelerators in the region. I also found that many US news outlets didn’t have much coverage of Arab startups so it gave me an edge.

However, as I was doing that, I also was offered an opportunity by an editor at Forbes to write mini-postcards for their website of my time in Lebanon. The editor would give me topics and different ideas and then I would craft these kinds of travelogues from that. After about six months, Forbes offered me a paid gig writing about travel for their personal finance channel.

3) You Are An Award-Winning Journalist And Senior Contributor For Forbes, Your Writing Has Appeared In Many Other Big Publications, How Did You Get Involved With Forbes And These Other Big Companies?

See above for the Forbes part… as for other publications, I would say networking has helped a lot. I think it gets a bad rap but a lot of “networking” is actually just good communication skills. If I read an article by a journalist I like, I’ll tweet it out and tag them. When I speak at conferences, I’ll share insights from other panels, while also tagging people on social media. If I go to a work event, I email the host afterwards as well as tag things on social during. These small gestures go a long way.

Whenever I am in New York City or Washington D.C., I make sure to see ALL my editors in person…  living in a different time zone so far away from HQ I think it’s important to get face time with the people I work with regularly.

4) You Have Traveled And Lived In Many Countries, What Are Your Top Three Recommended Destinations To Visit?

Ah! The hardest question of all. Right now I’m obsessed with the south coast of Sri Lanka – I was there this New Year’s for a story and there’s something incredible about the sea, nature, and people there. It’s really pristine and many of the locals have awesome eco-initiatives.

I also highly recommend the family islands of the Bahamas. My favorite chain is the Exumas. You can rock up to an island there and really feel like you’re at the end of the world. My recommendation would be to rent a boat and just unplug for a week.

My third top destination would probably be my hometown, Southampton, New York. The area is known as ‘the Hamptons’ (although locals never call it that) and while it seems very splashy, it’s actually just incredibly beautiful and can be lowkey. It’s located on a peninsula at the end of an island so we’re surrounded by water everywhere. It’s a real dream.

5) You Have Been Living In Lebanon And The Middle East For Almost 10 Years. What Inspired The Move?

I was living in NYC working for a magazine in communications. I knew I wanted to be a writer and figured if I became a journalist, I’d be paid to learn how to write.

In college, I studied Middle Eastern Studies so I always knew I wanted to live in the Middle East. Because I was 24, I figured I might as well change my career and location at the same time. And so I looked at a map, saw that Lebanon was on the sea (as a surfer, this is a requirement) and picked the country. I also had a college friend from Lebanon so that helped.

6) How Did You Find A Job In The Middle East?

I had saved up $15k for my move so I wasn’t very pressured at first. I think that helped – I ended up landing a copy editing job within two weeks and getting my first paid writing assignment within three.

The best advice I have is to tell everyone in your network that you are moving and looking for work in X industry. A friend of a friends’ brother was the senior editor at a business magazine in Lebanon that was hiring, and because I’d posted on Facebook about my move, my friend connected us. Don’t be afraid of being vocal about needing a job.

7) And How Is Life There? What Is It Like Being A Woman In The Middle East?

I get asked this question a lot and I always think its funny as many countries in the Middle East have a higher percentage of women in public office or as c-suite executives than in the US.

I will say that street harassment is worse here – or at least for me, as I don’t look Lebanese. At the same time, I find that in workplace situations I am far more respected in the Middle East. I can count on one hand the number of times that I’ve been hit on by colleagues in the Middle East; in my three years of working in corporate America, it was probably closer to 50.

8) What Is The Going Out Culture Like In Lebanon?

Lebanon is famous worldwide for its going out culture. It does not disappoint. There are a lot of theories as to why – the post-war mentality, the East-meets-West vibes. But whatever the reason, Lebanese know how to party. Whether it’s a family fish BBQ on the beach or a club night until 6 am, it’ll be fun.

At first, dating here can be really fun because Lebanese men have more social graces than American men. For example, they basically have to pick you up and drop you off at your house.

But after a while, I realized that a lot of foreign women fall for what I call the “Lebanese boyfriend experience” whereby they think this guy is so great because of all the polite things he’s doing, but really he could have other girlfriends.

Now that I’ve been here nearly a decade, I’d say I’m pretty used to it… although the size of the country can be difficult as you’ll date someone and then find out it’s your friend’s roommates ex or something like that.

10) You Have Appeared On Television And The Radio In Addition To Writing, Which Is Your Favorite Form Of Journalism?

Writing is without a doubt my favorite form of journalism but I’ve enjoyed doing short videos and photographs recently. In general, I like to think about the best way to tell a story and I think having different skillsets makes you better prepared to tell a story in the best possible format.

11) You Speak Three Languages, What Advice Would You Give To Readers Who Want To Learn Another Language?

The best way to learn a language is to live in the country it’s spoken. That’s the only way I’ve picked up a language.

Luckily though, we’ve made some great technological advances in the past ten years so that you can have access to native speakers from your computer. Namely, YouTube, Netflix, and Instagram. It’s a great way to passively learn. Following Mexican celebrities or Palestinian YouTubers has been an easy way for me to keep up with languages and it doesn’t feel like “work” after a long day.

12) What Advice Would You Give To Aspiring Journalists?

Read a range of articles and consume news from a variety of sources. It will help you to see what kind of journalist you want to be. I also would say if you’re unsure about where to start, start a blog about something that is easy for you to talk about. That helped me to figure out how to write an article without having to think about a publication.

13) Now For A Fun Question, Tell Us A Fun Fact About Yourself?

I can curse in nine languages.