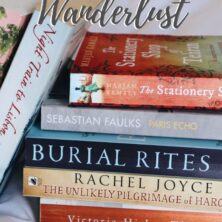 “Books are the plane, and the train, and the road. They are the destination and the journey. They are home.” – Anna Quindlen.

In these uncertain times, travellers everywhere are experiencing itchy feet syndrome as they’ve never felt it before. Unused to staying for so long in one place, many of us are longing for that sense of adventure and that trickle of adrenaline that comes with venturing into the unknown.

But there is still a way to experience these cultures, to wander the elegant streets of Paris, or to follow the winding footpaths of the English countryside, from the comfort of our own homes: through books. With so much downtime now on our hands, reading is one of the best forms of escapism and can inspire you to see life from a different perspective.

These 10 novels, each set in a different location, are guaranteed to reignite your lust for adventure, as we learn to appreciate that travel can take a number of different forms.

Here are our top 10 novels to inspire your wanderlust!

The Stationery Shop Of Tehran by Marjan Kamali (Iran)

A beautifully crafted novel, set in Iran’s capital during the 1950s before moving to modern-day Boston, The Stationery Shop of Tehran is, first and foremost, a love story.

Childhood sweethearts Roya and Bahman are teenagers who meet and fall in love among the dusty pages of their local bookstore, owned by gentle Mr Fakhri. But when political uproar sears through the streets of Tehran, Roya and Bahman’s plans to marry are torn apart, forcing their lives to follow very different paths.

Iran’s tumultuous history and glitteringly-beautiful culture are brought to life within the pages of this novel, which transports you right into the bustling streets of the city, settled at the foot of the Alborz Mountains. The Stationery Shop of Tehran explores the idea of tradition, rebellion, family ties, and, most importantly, love.

A harrowing tale about mortality and existence, Burial Rites is set within Iceland’s dramatic landscape, where Agnes is sent to a rural, isolated farm as she awaits her upcoming execution. After murdering her master, Agnes is at first avoided by the family housing her – so she turns to a priest named Tóti for spiritual guidance.

With its rugged terrains and extreme weather, rural Iceland seems the perfect setting for a murder novel with a somewhat poetic twist; Iceland’s nature seems to pulse with life, from its spouting geysers to its spewing volcanoes. The wilderness of this near-Arctic country seems almost otherworldly and will have readers dreaming of secluded hikes and starkly beautiful road trips through the outbacks of Iceland.

Introverted Raimund Gregorius is a Latin teacher at a high school in Switzerland, still mourning the remains of his failed marriage, when he bumps into a beautiful Portuguese woman on a bridge who will change the course of his life forever. Overnight, Gregorius packs up his life in Switzerland and jumps on an overnight train to Lisbon, guided by the writing of author Amadeu de Prato.

Night Train to Lisbon will leave readers madly in love with the Portuguese capital, with its steep, twisting streets, its clattering yellow trams, and its glimmering river. As Gregorius follows the tracks of his (fictional) esteemed writer, he wanders through the different areas of Lisbon, uncovering as much of himself as he does the city.

Kafka On The Shore by Haruki Murakami (Japan)

Kafka on the Shore tells the parallel stories of an elderly man named Nakata, and fifteen-year-old runaway named Kafka, both of whom are living in the Japanese city of Takamatsu. In typical Murakami fashion, both characters are quirky and intricate, interlaced with elements of the supernatural – which may or may not have something to do with the large number of talking cats introduced throughout the book.

A celebration and reflection of Japanese culture – particularly of Japan’s religious traditions –, both Kafka and Nakata attempt to navigate life in the city in their own ways, leaving readers desperate to explore the culture which is illustrated so beautifully within this book.

A novel primarily about people, human relationships, and love, A Little Life is 800 pages of pure emotion, which is easily read even in a single day. Willem, Jude, JB and Malcolm are four friends from college who move to New York after graduating: the story follows the twists and turns of their lives as they each navigate their existence within the city.

Yanagihara portrays New York as you’ve never seen it before. It’s definitely not all glittering skyscrapers and dazzling designer boutiques; the city described in the novel is real, raw and rough around the edges, its ruggedness somehow making it even more appealing.

Readers will long to wander the streets by night with Jude, ducking into bodegas and exploring the city that never sleeps.

The Unlikely Pilgrimage Of Harold Fry by Rachel Joyce (England)

When retired Harold Fry receives a letter from a long-lost friend, telling him that she doesn’t have long left to live, this very typically English man embarks on an entirely unexpected journey. Starting from his quaint little home on the Southern coast of England, Harold walks the length of the country, passing through some of the UK’s most breathtaking landscapes and traversing charming villages and towns.

For anyone in search of a breath of fresh air, The Unlikely Pilgrimage Of Harold Fry honours the beauty of the English countryside and proves that leaving your comfort zone can completely change your life, as well as your perspective.

Where The Crawdads Sing by Delia Owens (North Carolina, USA)

Guaranteed to make readers crave the crisp sea air, Where the Crawdads Sing is a novel oozing in natural beauty. Set almost entirely on a marsh in rural North Carolina, the book tells the story of Kya Clark the “Marsh Girl”, who has spent her life cast away from society in a wooden shack on the beach.

Owens’ vivid depictions of the birds, plants, and wildlife that surround Kya are dreamlike yet untamed, with tall rushes blanketing the water and swooping gulls dotted through the air. Owens’ writing style is song-like yet simple: this is a book that you will savour until the very last page.

Call Me By Your Name by Andre Aciman (Italy)

Set against the stunning backdrop of the Italian Riviera during the 1980s, Call Me by Your Name is predominantly a love story, which explores the blossoming romance between a teenage boy and his father’s summer research intern.

Featuring an unbelievably picturesque Italian villa, with sweeping grounds and elegant furnishings, the scenery within this novel is almost as gripping as the story itself; in the sleepy piazzas of rural Northern Italy, old men gather around the tables of the local bars, fountains trickling in the distance.

The romance between Elio and Oliver, which lasts only for a couple of months, will change both men forever, and will also leave readers daydreaming of lazy summers in the Italian countryside.

A tale which straddles four generations, The Island is based around Crete’s infamous island of Spinalonga: Greece’s former leper colony. Alexis travels from her home in London to this North-Eastern part of the Cretan coast, hoping to uncover the details of her mother’s past, but instead stumbled across a dark secret about her great-grandmother and her family.

Set in the charming fishing town of Plaka, which faces across the water to Spinalonga, this book is a perfect depiction of Cretan life and the way that tradition has been upheld over the years. Expect glittering blue seas, endlessly stretching beaches, and sleepy Greek villages, bathed in sunlight.

Sebastian Faulks’ novel follows the unlikely intertwining of the lives of two very different characters: Hannah, an American research student, and Tariq, a teenage runaway from Morocco. Together, they uncover a Paris that many don’t get to see: one in which every building and street seems to contain traces of Algerian history of the German occupation.

Set in modern-day Paris, Paris Echo shows the reader that there is much more to this elegant, fashion-savvy city than meets the eye. From the multicultural suburbs to the Tuileries Gardens, Tariq explores Paris from underground, its contradictions only making the city more charming. This is a Paris unlike any other.

In the summer after graduating from college, Suleika Jaouad was preparing, as they say in commencement speeches, to enter “the real world.” She had fallen in love and moved to Paris to pursue her dream of becoming a war correspondent. The real world she found, however, would take her into a very different kind of conflict zone.

Jaouad embarks on a 100-day, 15,000-mile road trip across the country, setting out to meet some of the strangers who had written to her during her years in the hospital. Between Two Kingdoms is a profound chronicle of survivorship and a fierce, tender, and inspiring exploration of what it means to begin again.

We hope that this article has helped inspire you to read these novels to inspire your wanderlust. If you have any questions about the destination or have your own travel tips to share please leave these in the comments below.

17 THINGS I’VE LEARNED AS AN EXPAT IN ITALY
20 OF THE BEST COFFEE TABLE TRAVEL BOOKS
A LOCAL’S GUIDE TO VENICE, ITALY