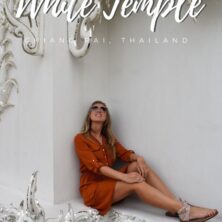 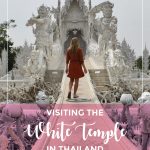 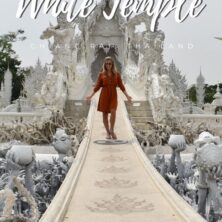 This spring my friend and I spent 10 glorious days in Thailand, and I fell in love with everything about their culture. After a lovely stay at Four Seasons Chiang Mai, it was time to head to our next destination, Fours Seasons Tented Camp in the golden triangle.

Four Seasons Chiang Mai set up a driver to take us on the four and a half hour trek across the country to their sister hotel. The White Temple was on the way so we, of course, stopped to check it out. It was well worth a visit, and, as usual, I took way too many photos!

About The White Temple

The White Temple, known as Wat Rong Khun, is a privately owned Buddhist temple and art exhibit in Chiang Rai. Chalermchai Kositpipat, a local artist, used his own money to build the temple and says the entire project will not be completed until 2070.

Wat Rong Khun is open daily from 6:30am to 6:30pm and admission is free. You can take as many photos as you want outside, but photographing inside is not allowed. We stopped by the temple in the afternoon, at which point it was very crowded with tourists, making it difficult to capture good pictures.

I recommend visiting early, and leaving at least an hour to snap photos and explore. Parking is available close by and there are restaurants as well as a few shops right outside the temple where you can get food, drinks and souvenirs. You probably only need an hour here if you are four people are less. For bigger groups, I suggest leaving an hour and a half to explore and take photos.

Interesting Facts About The White Temple

Here are some interesting facts about the White Temple. The White Temple was designed and funded by the same man – Thai national artist Ajarn Chalermchai Kositpipat. The bathroom building at the White Temple is gold and considered one of the most ornate and beautiful bathrooms of its kind in Thailand so this is a good place to stop to use the toilet – haha.

Most temples in Thailand are decorated in gold, but Ajarn Chalermchai Kositpipat chose to use white instead. The color white symbolized the purity of the Buddha.

The White Temple construction began in 1997, but it is a work in progress. Changes are constantly being made to the buildings and the surrounding gardens and as I mentioned the artist does not expect to complete it until 2070. Now that is what I call a long term commitment!

Chiang Rai is a city in northern Thailand with a population of 200,000. It is located in the mountainous province of Chiang Rai (yes the province and the city have the same name). The city of Chiang Rai is near the borders of Laos and Myanmar (formerly Burma).

We hope that this article has inspired you to visit The White Temple. If you have any questions about the destination or have your own travel tips to share please leave these in the comments below.

Want to share your own travel tips by guest writing for We Are Travel Girls? Visit our Contribute page for guidelines and to submit your article.

Book Your Stay In Thailand

This article may contain affiliate links. If you purchase something using one of our links we may receive a commission. Please see our Disclosures for more information.