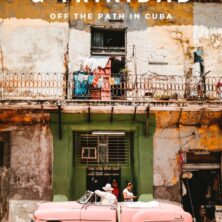 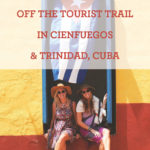 Cuba is a time-machine, an old-fashioned movie and wears its rich history on every corner. People have said it before and they will say it again, being in Cuba is like stepping back in time. The vibrant culture was contagious and there were more photo opportunities than our cameras could handle!

Since the US embargo in the 1950’s not much has changed. The old vintage cars remain in working condition, payphones are still in use on every street, the salsa shaking live bands and the WIFI mystery; Cuba captivated our minds and pulled on our heart strings from our first Cuban dance.

During our Cuban journey, it was the forgotten city of Cienfuegos and the colonial Spanish town of Trinidad that caught our attention and filled the memory cards on our cameras.

On our first day in Cienfuegos we hopped into an unmarked taxi that was hailed down by a helpful local. It was a bright green 1950’s pre-revolution vehicle with peeling paint, one semi-flat tire and no seatbelts. As we drove off Lyss was leaning on the backseat door.

We were mid-movement around the first corner when the door flung open and Lyss slowly slid towards the open space where the door had once been. I grabbed her arm and pulled her back into the car. Our first lesson for the day was don’t trust the car doors in Cuba!

Related Post: Helpful Things To Know As A Traveler In Cuba

We spent our days wandering the city, chatting to locals, embracing the lively culture and admiring the colourful colonial architecture that graced the streets. We found stalls filled with souvenirs made from everything and anything that the crafty locals could put together.

There was jewellery made from seeds, beans and shells, sculptures carved from bone and wood, hats stitched together from old soda cans and hand-dyed colourful tie-dye dresses. It was clear nothing goes to waste here.

We heard a beautiful story whist in Cayo Largo from an employee at the mariner. He was an older man with deep wrinkles in his face and always had a Cuban cigar hanging out of his mouth. He told us that he had once made an alarm system for his house using only old batteries and materials that he had found in the trash.

Cuban’s earned an average monthly wage of only $20-$25 USD for full-time work, whether it be the local shopkeeper or the surgeon at the hospital. It’s no surprise they have become clever and creative people, doing all they can to survive with their limited resources and money in a communist country.

Other travellers had told us that the supermarkets stocked only canned food, packaged meat and other essentials. And if you knew us, we are all about the fresh fruit and veggies and cooking home-made meals on the road. We scanned the various supermarkets and as expected, the rumours were true.

After failing to find fresh produce, we eventually retreated to having a quick ice-cold beer in the supermarket line whilst we chatted with some locals. A few conversations later and many failed directions, and we had found a cart that sold fresh and even organic fruit and vegetables on the side of the street. Hallelujah!

As you can see by the grin on our faces, we were stoked we didn’t have to eat canned mushrooms for dinner! The locals were funny characters and using our broken Spanglish we told them about the kangaroos in Australia and denied their boyfriend proposals. The motorbike tuk-tuk was a bumpy but very ventilated way to get home.

By the afternoon we found ourselves with a new friend who showed us the way to the local Sunday session hotspot. Club Cienfuegos was a rocking bar that overlooked the bay, complete with a live MC, blaring pop-songs, enthusiastic dancers and hundreds of locals all sharing bottles of Havana Club Rum.

As night fell, we sung, laughed and danced at a busy karaoke nightclub, Patio de ARTex. The contestants poured their hearts out while taking over the stage like someone on the X-factor. They sung with so much emotion in every line, that we could still follow along the story even without understanding the Spanish lyrics, whilst of course having a little giggle at the same time.

The sexy Caribbean dancing took it up a notch in Cienfuegos. Men and women were not shy dancers and did not hold back with their hip-to-hip moves. Our new friends grabbed us by the hands, dragged us around the dance floor and laughed at the concentration on our faces. Even though our clumsy white-girl moves were nothing in comparison to the typical booty-shaking Cuban moves, we were all still smiling and had a great time practicing our salsa.

Initially, we were enjoying the serenity of not having WIFI with a great excuse, we were in Cuba. But there comes a time in a girl’s’ travels that she needs to research her next destination. That time had come for us in Cienfuegos. A normal cafe was nowhere to be found and WIFI was almost just as scarce.

The WIFI mission had us on an Easter egg-like hunt across the city, but we were adults and the prize was WIFI not chocolates. We finally found a recharge card we could buy at a hotel after the telephone shop had sold out by 9 AM in the morning.

The recharge card allows you to access a limited number of internet hotspots in the city. We then sat at a takeaway chicken restaurant and enjoyed our 1hr of internet.

A highlight from Cuba was our road trip to the ancient colonial town of Trinidad in a 1951 Chevrolet. This beat-up vintage darlin’ was hired for only $50 for the whole day. It was painted a strong matte blue, it’s speed maxed out at 70km’s an hour and the boot had a mind of its own. Trinidad is situated on the coast at the bottom of the lusciously green hills, 3-hours from Cienfuegos.

Initially while walking the streets, we were gazing up at the buildings in total amazement. The bright miss-matching colours, the colonial Spanish design, the huge wooden doors and the rustic feel.

But it doesn’t take long to realise that these buildings look the way they do because they haven’t been attended to in decades. It’s clear they have mostly been neglected since the revolution in the 1950’s. Some of the houses have crumbling walls, roofs with holes, stripped paint and missing bricks.

None of this could steal the grin off the faces of the locals or take away the playful spirit of the children. Locals travelled around the cobblestoned streets of the inner-town on bicycles and by horse and cart.

There were more horses and carts than cars on the main highway surrounding Trinidad. The locals used them to transport their produce from place to place and even to pick up the kids from school.

Cuba is different than any country we’ve ever been to. A communist nation built on the Rum and Tobacco industry. While some countries and cities set up their tourist areas to represent what it was like to live in the ancient or later’ times, in Cuba, it was just their everyday life that we admired so much.

For us, Cienfuegos and Trinidad wasn’t about any specific points of interest or iconic tourist sites. They were made special by getting lost wandering up cobblestoned streets, finding our way into tiny bars, buying bracelets made from seeds, and learning from the locals about their culture, their communist lives and their joys.

At one point we even got our fortunes told by a Christian witch-doctor just by saying ‘hola’ to him through the front window of his house. Other people posed for photographs after seeing Lyss’s camera in hand, excitedly asking if we would put it on the internet.

Their happiness was infectious and their smiles could kiss even the darkest of hearts. Cuba proudly introduced us to its history, invited us to step back in time, captivated our minds and pulled on our heartstrings.

We hope that this article has inspired you to visit Cuba. If you have any questions about the destination or have your own travel tips to share please leave these in the comments below.

Want to share your own travel tips by guest writing for We Are Travel Girls? Visit our Contribute page for guidelines and to submit your article.

Book Your Stay In Cuba

This article may contain affiliate links. If you purchase something using one of our links we may receive a commission. Please see our Disclosures for more information.

5 THINGS TO DO IN LAS TERRENAS, DOMINICAN REPUBLIC
HELPFUL THINGS TO KNOW AS A TRAVELER IN CUBA
TIPS FOR TRAVELING TO CUBA AS AN AMERICAN

END_OF_DOCUMENT_TOKEN_TO_BE_REPLACED

Exclusive Member of Mediavine Travel Development by Chalk and Canvas