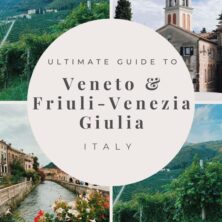 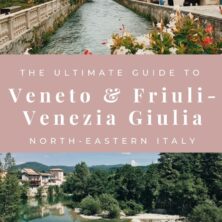 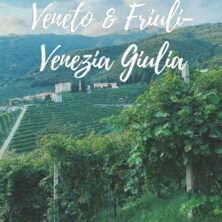 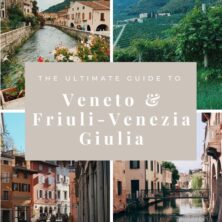 If there’s one thing we’ve learnt this year about travelling, it’s that it pays to venture off the beaten trail. Around the world, people are trading crowded capital cities for untouched natural beauty, swapping cosmopolitan commuter towns for compact, picturesque villages; and where better to find these quaint, underrated destinations than tucked away in the north-easternmost corner of Italy?

The regions of Veneto & Friuli-Venezia Giulia may not boast the ancient monuments and glittering Mediterranean coastlines of their southern neighbours. But what they lack in stereotypical ‘Italianness’, they easily make up for in breathtaking landscapes and rich, unique traditions.

From mountains and vineyards to lagoons and beaches, here are 10 must-see destinations in North-Eastern Italy you’ve probably never heard of.

Dubbed the coffee capital of Italy, Trieste’s turbulent history is palpable even today.

A city which not-so-long-ago belonged to the Austro-Hungarian Empire, Trieste is a melting pot of cultures, a curious marriage of Italy and Eastern Europe, which manifests itself in its rows of elegant buildings.

Also recognised as a hub for academics and intellectuals, Trieste boasts an impressive list of ex-residents, including names such as James Joyce and Kafka, who would gather in the city’s iconic coffee houses to discuss ideas and philosophical theories.

Pay a visit to Antico Caffè San Marco: one of the city’s oldest and most traditional coffee houses.

Gorizia’s unique geography renders it one of Friuli-Venezia Giulia’s most interesting cultural destinations.

Split by the Italian-Slovenian border, Gorizia is a city literally divided in two, each half straddling a different country.

Head up to its 11th-century castle for views across the city, before sampling some of the region’s infamously hearty cuisine at Trattoria da Gianni.

The beating heart of Friulian culture, Udine is a small city bursting with its own distinctive traditions.

The centre of this vibrant university city is charming, its streets framed by Venetian-inspired architecture, each building seeming to house a tiny bar or osteria, whose tables spill haphazardly onto the cobbles.

The Piazza della Libertà is perhaps Udine’s most picturesque square, the white and blue clock tower modelled on the celebrated Torre dell’Orologio in Venice; the striking castle keeps watch over the city below.

For traditional Friulian food – such as a generous portion of ‘frico’, or sweet, creamy pumpkin gnocchi – head to Osteria al Vecchio Stallo. For an after-dinner tipple, try the cosy Osteria Pierimortadele, where a glass of local wine will set you back only €1.

A small island set within the tranquil Murano lagoon, Grado is arguably the most beautiful coastal destination within Friuli-Venezia Giulia.

Although often visited for its soft, sandy beaches, Grado is known also for its historic city centre, whose rural stone architecture dates back to Roman times, when the town acted as the first port for boats looking to travel along the Natisone river.

For delicious fish dishes, make sure to try Trattoria de Toni: one of the city’s best-renowned eateries, famous for their seafood platters.

Nestled into the foothills of the Dolomites, Cividale del Friuli is a picturesque town whose buildings overhang the icy water of the Natisone river.

Its medieval city centre renders Cividale one of the region’s most charming destinations, quieter than its larger and more tourist-heavy neighbours.

Like something from a fairytale, Cividale’s main point of attraction is a rugged stone bridge known as the Ponte del Diavolo, or ‘Devil’s Bridge’, whose cobbles carry an intriguing legend which has been passed down through generations.

Cividale is also known throughout the Friuli-Venezia Giulia region for its mouth-watering, cinnamon-based wintertime desserts: ‘gubana’ and ‘strucchi’.

One of the largest and most culturally significant cities in this part of Italy, Treviso is often dubbed a ‘mini Venice’; this title does not do justice to the city’s own rich culture and identity.

Laced through with gentle canals, with a compact city centre doused in history, Treviso is easily one of Veneto’s most intriguing destinations.

Although celebrated largely for its beauty and for its impossibly quaint architecture, Treviso is also renowned for its thriving food scene: the city is home to both spritz cocktails and too creamy, coffee-based dessert tiramisù (although this title is often fought over between the two regions!)

For traditional, local dishes, served – of course – on red-and-white checked tablecloths, head to Antica Osteria Ai Carraresi; if a more modern brunch tickles your fancy, then quirky Malvasia boasts one of the city’s prettiest locations.

Venturing across the regional border into Veneto, you may stumble across the coastal town of Caorle (or ‘Caorlifornia’, as the local’s joke).

Although small, Caorle is celebrated particularly for its picturesque seafront, where the promenade is framed by large, rugged boulders; a lonesome white church juts out over the water, almost eerie in its peacefulness.

The town centre is made up of a cluster of endearing coloured houses, spiralling away from Caorle’s iconic cylindrical bell tower.

A quaint, compact city, Conegliano is famous for one thing in particular: prosecco. Its city centre is incredibly small but equally stunning, its cobblestone roads flowing like arteries from the hilltop castle at the city’s core.

As you’d expect from a city celebrated for its wines, Conegliano is surrounded by endless rolling hills blanketed by vineyards. Among these hills, budding sommeliers can follow the Prosecco Trail, which guides you around some of the region’s top vendors and into some of the country’s most renowned ‘cantine’.

Back in the city centre, make sure to stop for your evening aperitivo at funky prosecco bar Garage.

Although it lies just a few short kilometres from the Veneto-Friuli border, Portogruaro is decidedly Venetian in its culture, its coloured canalside architecture reminiscent of its well-recognised neighbour, Venice.

Dating back to the 1100s, the history of this town is palpable among its streets; pay a visit to the curious 51-metre-tall Torre Civica, which is now leaning almost a metre away from its original position.

Huddled comfortably at the foot of the Dolomites, Vittorio Veneto is, historically, one of the most significant cities in this part of the country: it is most famous as the location of the Battle of Vittorio Veneto in 1918.

Formed by merging the two neighbouring communes of Cèneda and Serravalle, Vittorio Veneto’s city centre is vast and scattered, with small, picturesque squares peppering the streets.

The steep, elegant Scalinata di Santa Augusta is a popular starting point for enthusiastic hikers and trekkers, longing for the crisp air and awe-striking views from the mountain above.

We hope that this article has helped inspire you to visit Veneto & Friuli-Venezia-Giulia, Italy. If you have any questions about the destination or have your own travel tips to share please leave these in the comments below.

ULTIMATE 7-DAY ROAD TRIP ITINERARY FOR MADEIRA, PORTUGAL
SOLO HIKING IN ZAKOPANE AS A FEMALE
10 BEST THINGS TO DO IN PICO, AZORES ISLANDS